The Dark Era of sparrows

Besides condamning to death millions of people, Mao tse Tung (or Mao Zedong) is also responsible for one of the greatest bird massacre of the history. Tree sparrows were blamed to eat the crops, thus, the communist leader proclaimed his famous pest control campaign. As Mao's other campaigns this one was also based on the mobilisation of the rural communities. 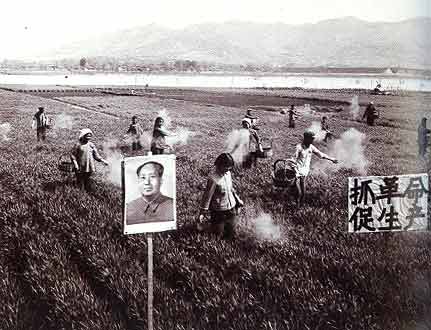 Peasants were told to go out to the fields, screaming at the tops of their voices and making noise in every possible way. The birds were frightened and took off, and since the hubbub went on steadily, the sparrows did not dare to land. People also carried tall sticks and chased away birds from the trees. Constant flying and escaping exhausted the sparrows soon and they simply fell down. The method was highly effective, and millions of sparrows were slaughtered.

See a short (~1 min.) documentary about the campaign.

Nevertheless, the action was a fiasco and (even more inmportantly) it was counterproductive as worms and insects suddenly released from predation became extremely abundant. By the second season after the "kill the sparrow" campaign, China was distressed by one of the greatest locust invasion of its history. In the following years, due to the insect invasion (among other factors) China was plunged into famine. Estimates of the number of people died in starvation range from 30 to 43 millions...